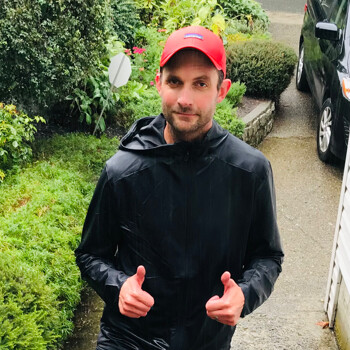 In spring 2021, I'd had a sore on my tongue that just wouldn't go away. A few trips to the doctor later, and the awful news came to me over the phone on July 19: it was cancer. I was a healthy guy - why was this happening? Perhaps fortunately, there was no time to dwell on that, as I had a seemingly endless series of doctor appointments and scans.

I had surgery on Aug. 10. Part of my tongue was removed, plus all my lymph nodes on the right side of my neck. It took several weeks to recover from the surgery. Shortly thereafter, I was booked for 6 straight weeks of radiation therapy and chemotherapy. Both were debilitating. By the last radiation treatment on Nov. 10, I'd lost about 20lbs.

The thing is though, crazy as my experience has been, it's all too common. Over 2 in 5 Canadians will be diagnosed with cancer during their lifetimes. 1 in 4 Canadians will die of cancer. I have known far too many people who have had cancer - friends from school, friends from university, family members, colleagues, neighbours. Some have survived; many haven't.

I'm doing the Tour de Cure, which is a 100km bike ride on Aug. 27. The Tour raises money for the BC Cancer Foundation, which supports the BC Cancer Agency. The Agency is a world-leading organization that does great work. I want everyone to have the same terrific care that I have had. I wouldn't be here but for the doctors, nurses, and staff at the BC Cancer Agency.

Our team name is W.A.R. - "We Are Resilient". It was tough to be resilient when doing the simplest things - eating, talking, picking up my kids, walking the kids to school - became challenging or impossible. But resilient is what we all must be when faced with this disease. Cancer is a battle, fought on many fronts, from research centres, to hospitals, to our homes, and in our hearts.

There are so many people I'd like to thank, but I'll single out three of them here. To our kids, Finn and Rosie: In 2021, the two of you taught me more than you can know about being resilient; you've been amazing. And to Eleana: You were at your best when I was at my lowest; I couldn't have done it without you.