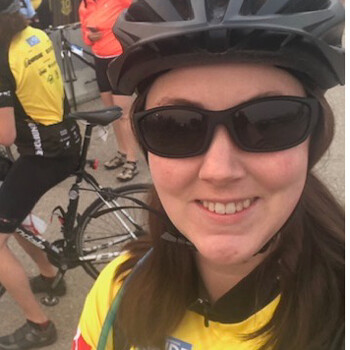 July 19th 2022 UPDATE: Today I went for a measly 5km bike ride. It was short but boy was it sweet. Why so short yet so sweet? Well I am incredibly honoured to have such amazing people in my life and one of them, Teresa/Noni, donated her road bike to me. Like the entire road bike!! Can you believe it? I'm still pinching myself. Declan & I went out and bought me some clip in shoes, this morning I bought a new floor pump since ours didn't get to a high enough PSI for the road tires, and off I went. Well, not that quickly because I had never clipped in or out of pedals before so that was an adjustment. Then I learned how to change the gears and practiced just cycling on such skinny tires and a lightweight frame. I stayed on pathways and kept close to home as I don't have a bell or light etc on the bike yet. I plan to retrace my 55km bike ride from last week and see the difference in time, next week! Stay tuned!
Also, another amazing support in my life comes from Opa Sid who topped up the remainder of my required minimum so I could focus on training and not earning the last bit I need. It is a HUGE relief to have that off my mind for sure. I appreciate every single donation and every single ounce of support I have received, honestly. I know there's a lot of people out there looking to have their cause or mission supported so I am honoured for everyone who has chosen to donate to this and therefore donate to the memory of my sweet sweet Mumma. Rest her beautiful soul. XOXOXOXOXO.

UPDATE: I will update my training journey and more, on this page, as we get closer to GO TIME. Im emotional when I talk about training because it's been tough, like really tough. The link posted above for "I Lived" by OneRepublic means everything to me. I cant listen to it without crying yet I get so determined at the same time. Its her. The song is for her. She loved this song...
Other songs on my playlist for Mum are: Pink-All I know so far (I feel like its her talking to me) and another one of her favourites Adele-Easy on Me.
On June 22nd with my husbee by my side we conquered a 50km city-ride. We rode on all kinds of terrain through the city. By the end as we got closer to home we realized we'd be at about 46km total. With extra sore hands (should've worn the biking gloves) and very sensitive butts we pushed on to ensure we hit 50km. No matter how sore and uncomfortable we were at the end of the ride, it was NOTHING compared to how Mum lived every day. With one leg more than twice as big as her other leg, tight, unable to bend it, no relief with meds, positions, compresses, lymphatic massages..nothing. And then....both legs...
Surely, I can ride a bike for a bit. Right? We'll see.

Training Updates: in October my dear husbee surprised me with a spin bike for our basement and I rode 190km that month! Unfortunately I had a very tough and rocky few months after that with my health/career/situation. I struggled. I got back on the bike in March and rode 56km.
April (we were gone to Mexico for 2 weeks)
May-71.5km total
June-71.5km total (but started running as well YAY nice weather)
July...stay tuned; this will be a big month!

My biggest challenge will be: The emotions HANDS DOWN but I know I'll have some of the best cheerleaders out there pushing me along ;) and HILLS...dang those hills!

Next update in a few weeks! Thanks for reading.

I have begun fundraising in order to defend the precious lives of those who are/have/had to face this beast. Each dollar I raise will go directly to some incredible work being completed in order to advance our way to a cure or more effective treatments. Every single bit counts.

Mum was so so passionate about making a difference. She joined this challenege for FIVE years and was able to partake in 4 of them. Sadly Mum lost her life 2 months prior to her 5th Ride but that didn't stop her from fundraising until the very end and earning her coveted gold helmet. As her daughter, I will continue this legacy for her and work tirelessly to be able to add to the fight and support those who are battling.

My Mum died at the age of 55. She was a wife (of nearly 3 decades), a Nanny (to my 2 young boys), a Sister, an Aunty (who adored her nices & nephews to bits), beloved coworker, best friend to many and one of the most creative people I've ever met. She was so FIERCELY loved. On June 19 2021 I lost my best friend and greatest love. She wasn't just my Mum, she was everything to me.

Mum's journey starts with a diagnosis of Stage 2 Vulvur Cancer in April of 2014. Prior this diagnosis Mum had been having what a few doctors thought was a simple recurring abscess in her groin that was treated with antibiotics. Eventually a doctor decided to ultrasound the area which led to a biopsy, the diagnosis and a PET scan for staging. She was a stage 2 as she did have minor localized/regional metastasis to her left groin. At the time I was in my 3rd trimester of my pregnancy with my first son and her first grandson. The news was jarring. The prognosis was good though. Mum started 5 day a week targeted radiation treatments with a chemo session each friday. This lasted 5 weeks. After completing the treatment Mum was deemed in remission. She went to every appointment with both her oncologists and everything was going great until one day in the winter of 2017.
Mum and Dad were heading off to a Hedley concert but Mum noticed one of her legs was much larger and swollen than the other. She decided to be checked out at the hospital. The ER doctor wasn't sure what was causing it so she left without answers and was frustrated. The swelling continued. During a conversation I remembered her left groin lymph nodes being affected by her previous cancer and asked her to call her Oncologist. They booked her an appointment. It turned out to be lymphedema due to cancer in her groin/lymph nodes. It turned out the cancer was gone from the primary site but was never erradicated from her groin at the doctors had thought. Now she was facing the beast of cancer yet again but this time it was deemed non-curative. Mum immediately went into chemo treatment. She was able to have more radiation to the same area and was not a candidate for surgery due to the vascular nature of the lymph node involvement related to her femoral artery. The only treatment option on the table for her was chemo. She jumped in with both feet and started her battle once again. As a family we tried everything we could to find another answer or cure. We sent her pathology sample to the States hoping for a gene therapy or immunotherapy option but was declined for both. At one point Mum's oncologist was hopeful about two clinical trial studies. Mum went off chemo in preparing for being accepted into one of the two trials but after meetings with scientists and scrutinizing of her genetics and history, Mum was eventually rejected from both trials. Back to chemotherapy she went....
Mum was under some form of chemotherapy treatment from 2017 until she passed away mid-2021. Eventually her body became resistant to the benefits of the chemo and the chemo caused damage to her body functions. Mum's tumors continued to grow and eventually occluded her ureters from her kidneys to her bladder. Mum was treated with stents and then eventually had bilateral nephrostomy tubes. In the end she died of kidney failure related to the progression of the cancer. She was married for 25.5 yrs to the most amazing Man in the universe. Her two grandsons were 7yrs and 4yrs old and they loved her more than I could ever describe. From the young age of 49 Mum had been fighting for her life. She is now resting her soul. As a Paramedic there was nothing I could do to help her. I felt defeated and lost. Now I have my purpose. I will continue her fight each and every year. I will carry on her legacy of completing this cycling challenge while fundraising for what was the most important initiative in her eyes.
My goal for 2022 is to Ride the full 100km in a single day without being swept or advanced ahead by the helpers-100km of my own pure sweat and determination! It seems like a small task when compared to the Fight so many have endured.

Thank you so much for your support and reading about how Cancer has affected me personally. I know there are so many people out there who have or are suffering at the hands of this disease and I vow to work my hardest to be successful in my fundraising with all of you and your families in mind!

I Love You Mumma! XOXO