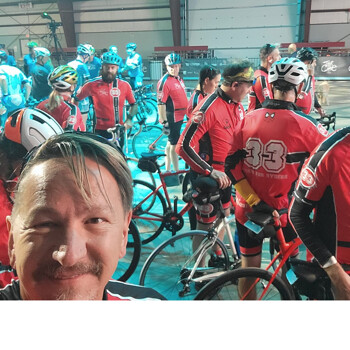 I rode my first 200km ride in 2013 in Alberta while a friend, Heather, was at the Baker Cancer Centre in Calgary. After the ride, I went to see her, fairly certain I would not see her again. In 2014 I was not able to ride because of a broken ankle (don't play hopscotch in cowboy boots)! Then a few weeks before I was to embark on the ride in 2015 in BC a dear friend called me to tell me that Heather had lost her battle. She had been in hospice for two years and had fought for every day.

2015 was a doozy of a ride. Massive winds that blew portapotties across parking lots, trees and powerlines down, winds that you had to lean so far into that sometimes it felt you were peddling but moving backwards. There were so many times I wanted to quit, but people who are fighting cancer don't have that option. They fight for one more day...and one more after that. That was the year that I joined an amazing ride team, Riders for Ryders.

Since that year, I have ridden with Riders for Ryders, and together we continue to raise money for cancer research. In the fall of 2021, I lost a highschool classmate to a four year battle with cancer. Sarah was only 23 days older than me. She was a classmate, a friend, a sister...family that I grew up with in a boarding school in Africa. My 2022 ride was dedicated to her. In 2022, the Tour de Cure had just over 1100 riders, and still raised over $6.3 million. Until there is a cure...until another person doesn't have to dread hearing those words...we will continue to ride.

2023 will be my 10th year to ride. While I have always raised at least $2500 per year, I want to surpass my previous amounts. In 2018, I said I would get a buzz cut if people donated $500 and would go bald if I received $1000. Over $3000 later, I let the top 5 donors each have a turn with the clippers. This year, as I head into my 10th ride, I want to raise at least $10,000 for cancer research - $1000 for each year. We will be back to a full 2 day, 200km ride from Surrey to HOPE. Please be a part of this journey with me. Click on the donate button and help me make a difference for those people in my life that are fighting cancer. Help me make a difference for those people in your life that are fighting cancer. We are all impacted in some way. Any amount is gratefully received. Give what you are able, whether that is $20, $200, $500 or even $1000. Together we will conquer cancer!