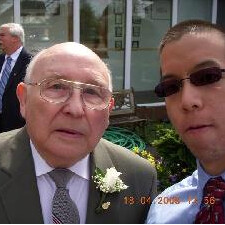 On November 7, 2013 I received an email from John Holland, President of PHH ARC Environmental, the company I previously worked for, for a little over six years Stan was re-admitted to hospital last Sunday. He has been receiving ongoing treatment for cancer over the past year or so. My heart sunk, and I immediately felt a sense of sadness and disbelief.

I considered Stan to be a confidant, a trusted advisor, a mentor, and a true friend. I met Stan nearly ten years earlier, when I started working at PHH. But it wasnt until the company moved us into a shared office that I began to get to know and appreciate Stan, the person. One of my first encounters with Stan was after I borrowed his label maker unbeknownst to him and despite meticulously following the instructions, I somehow managed to jam the label maker! At the time, I didnt really know Stan, and he had a bit of a reputation for being protective of his equipment, so I asked around the office to see if anyone could help me fix it before he found out, but I didnt have any luck. The next day, I had to tell Stan I borrowed his label maker and broke it in the process. I was quite scared at how he would react, but I soon found out my worries were unwarranted Stan, the stern, 70-something year old, ex-Marine and SAS Member, was kind, understanding, and forgiving.

And so began our friendship. Like any true friend, Stan was always there to listen and help me solve lifes problems. I will forever cherish and be grateful for the five years that we shared an office, and the wisdom and life lessons he bestowed upon me over that time like how to disarm a knife-wielding attacker, pick locks, incapacitate someone with a quick jab of the thumbs to the jugular, and even how to hotwire a car (in theory).

After receiving Johns email, I made my way to the hospital to see how my old friend was doing. It had been a while since I last saw him, but we chatted, laughed, and reminisced about old times like no time had gone by. He was in good spirits, and told me that he was on the mend and that we should grab lunch when he was discharged from the hospital; but perhaps he was putting on a brave front for me.

Sadly, on November 25, 2013 I received another email from John. our friend, colleague and all round great guy Stan Mollett passed away early this morning in Vancouver General Hospital.

Stan was one of a kind a kind spirited, thoughtful, gentle soul. As I reflect on the time I had with Stan, the fond memories bring a smile to my face. I am consoled by the fact that Stan is smiling down on us, sipping on his favourite, Glenfiddich on the rocks.