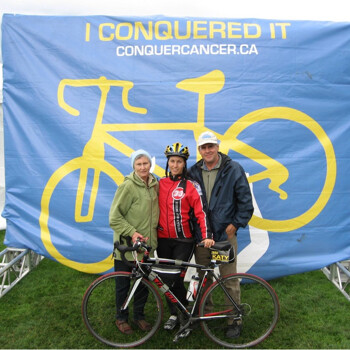 The Ride has changed... my story stays the same...

I've raised money for, and ridden in the BC Ride To Conquer Cancer 12 times. It was a little different in 2020, and yet a little different still in 2021. The BC Ride is now the "Tour de Cure", but, "why we ride" remains the same. 2022 will be an organized ride yet again, but it will take place over one day rather than two. So, this year I will step it up! I've also registered for the 2022 Ontario Ride to Conquer Cancer. This will be a 2 day event. So, in total I will raise $5000 and ride for 3 days!

As I enter my 13th year of the BC Ride and my 1st year of the Ontario Ride, it will be the 7th year I will be riding for my Dad.

At the end of August 2015 my Dad went to the doctor for what he thought was a sinus infection. Then came the tests, and the biopsy...and the diagnosis, Non Hodgkin Lymphoma. The prognosis was good. My Dad was a healthy, fit, and positive person... He would beat this! He couldn't wait to start the Chemo treatments. He was ready to fight!

He had his first Chemo treatment on September 22nd and the second treatment on the 23rd. He felt good and the lump on his neck had shrunk 50% in size... It was working.

I made my plans to go home for Thanksgiving to visit and be there with my family during this trying time. Shortly before I came my Dad was taken to the hospital because he was having trouble breathing. He told them "you can keep me here all week but I need to go home for the weekend because my daughter is coming". He was adamant. On thanksgiving weekend I spent time by my Dad's bedside in the hospital while he received oxygen through a tube in his nose. We had a good visit. I left on Thanksgiving Monday... Later that day he was put on a ventilator.

My sister flew home from Dubai on October 14th. He came off the ventilator for a few days during that time and they had a chance to visit. He wanted so badly to just go home. To just get out of the bed. To even look out the window. He couldn't. The ventilator went back in. On October 17th he turned 66... He didn't even know.

My Dad had a rare reaction to the Chemo. He had developed Acute Respiratory Distress Syndrome (ARDS). His lungs weren't expanding. They were shutting down. On October 25th I got that chilling phone call... "You need to come home". I flew home the next morning.

My Dad was transported by air ambulance to the Kelowna Hospital and we followed. They had specialists. There was hope.

For 11 days we went to the hospital hoping the doctor would have good news. No changes. During that last week we were told that not seeing any improvement was the same as getting worse. We were told that at the end of the week if there were no changes we would have to make "THE" decision. Every day that week we went in. Every day - "no changes". Friday came. No Changes.

On Friday November 6th, 2015 we said goodbye to my Dad. A little over 2 months earlier he was a happy, healthy, active father, husband, friend, and inspiration to many. The world lost an amazing Man that day. I lost an amazing father.

A rare reaction to the treatment that was said to be the "best option". In 2 treatments the tumours shrunk by 80%. He would have survived the cancer.

We need to find a better "best option"

Since I started this ride in 2009 I have ridden for George, Auntie Shirley, Uncle Larry, Auntie Marge, Roberta, and for everyone who has ever had cancer.

Adding my Dad to that list was never something I imagined I would have to do.

This year I'm asking you to either join me or sponsor me in support of my Ride - let's find a better option.

Thank you in advance for your support